With the entry-level drone Ryze Tello you can only fly about 100 meters, as described in our detailed review. With a cheap additional device you can increase the range and the maximum altitude significantly. In this article we show you which equipment you need to increase the range of the Tello. In addition, we explain step by step how to set up the device. Finally, we demonstrate the effect with videos in which we fly the drone over 210 meters far and 30 meters high.

What do you need to increase the flight range of the Tello?

Here is a list of the devices needed to follow this guide. The links lead to the products on Amazon.

In the steps below we will clone the WiFi network that Tello is building using the repeater. We will clone the network so that we can later connect to the repeater with the mobile phone or tablet as if we were connecting directly to the drone. So the repeater serves as a bridge, which at the same time increases the range of the signal.

First we switch on the Tello and connect our mobile device, which we usually use to fly the Tello, to the WiFi network of the drone as usual. We open the official Tello app, click on the gear icon in the top left corner and go to the Wi-Fi settings.

Here we first change the Wi-Fi name to any name that does not contain a “#” character. The hash is a special character that causes problems with the Xiaomi Mi WiFi Repeater when connecting. Next we choose any password with at least eight characters, which we remember. If a message window opens, we confirm this with “Restart”.

Next we restart the Tello manually by pressing the button on the side of the drone to turn it off and then press the same button again to turn it on.

We now test if the new setting of the Tello WiFi network has worked and connect our mobile device in the WiFi options of Android or iOS to the new network without “#” in the name. Here we can test if we managed to remember the password.

Now we can turn off the Tello again. We now reconnect our mobile device to the Internet via our home network or the mobile Internet. However, we recommend a WiFi connection as we now download an app.

We now need an additional, free app on our mobile device. We are looking for “Mi Home” in our App Store. This is an app to control all Xiaomi smart home devices. Since the repeater is one of those, it can be configured via this app. And don’t worry: We only need the app during setup, after that you can delete it from your mobile phone or tablet.

After logging in to our Mi account, we now want to add the WiFi extender as a device.

First we take the WiFi extender from Xiaomi and connect it to the USB port of the power bank. A yellow light should now flash on the WiFi repeater.

Below you will find an illustrated guide to setting up the repeater in the Mi Home App. The steps are explained in detail in the text underneath the pictures.

In the Mi Home app we now click on the “+” symbol in the upper right corner to add a new device. We type “Repeater” in the search bar and select “Mi Wi-Fi Repeater 2”. We confirm. We will then be prompted to connect to a Wi-Fi network. Then we minimize the app.

Now we need to connect our mobile device to the network that the Xiaomi repeater has built. We minimize the app again and go to the WiFi settings of iOS or Android. There we connect to the network “xiaomi-repeater-v2” and go back to the Mi Home App.

Now the repeater starts cloning the drone’s network. All devices should be close to each other. We wait until the process is complete.

If this process is finished, we have successfully set up the repeater. The LED on the WiFi extender, which was yellow before, should now show a blue light.

Phew, that was a hell of a lot. But don’t worry: you only have to do this once. Only if you want to use a new drone with the repeater you have to insert a pointed item into the reset hole of the Xiaomi repeater to reset the WiFi extender to factory defaults.

Now we’ll check if everything works. The following prerequisites must first be met:

Now we connect our mobile phone or tablet not with the regular Tello WiFi network but with “NameOfTelloNetwork_plus”. The network with “_plus” at the end is the network cloned by the repeater. At the first connection we have to enter the password again, which we set at the beginning of the tutorial for the Tello-Network. The password only has to be entered once. The WiFi password is then stored in your device.

Now we go into the tello app and see if we can receive the drone image.

Now we’re done. Now we can try out our new flight range.

The repeater can be tilted. It is advisable to set it up straight when flying so that the antenna can transmit far. It is also recommended to place the repeater on a raised position. A few ideas:

You can set up the repeater together with the power bank in different ways. If you place the repeater comfortably right next to yourself and the starting point of the drone, you can easily reach heights of 30 meters and distances of more than 210 meters. This is shown at the end of the article in our videos. However, you can also place the repeater so skillfully that you can cover even greater distances:

In our test we flew with the Tello 216 meters far away from our starting point. The flight took place on an open field. Due to the strong wind the way back was a bit more difficult, as you can see in the video.

You can see the range at the bottom of the screen. Other individual menu items are (from left to right): Sports mode, speed, distance, altitude, landing button, signal strength, battery level drone, battery level mobile device.

Our range could certainly have been increased with the above trick. The Xiaomi-extender in our test has been placed on a bicycle saddle to reach an elevated position. One could also have placed the bicycle with the repeater in the middle of the field. Since the field was however planted, we did not want to destroy the small plants.

On the same field, we immediately carried out another test flight to test the maximum flight altitude of the Ryze Tello with the Xiaomi WiFi Repeater 2.

We could easily reach the 30 meter height and take photos from up there. 30 meters is a flight altitude limit programmed in the app. If we had raised it and flown even higher, it would also have worked, as you can see from the signal strength in the video at a height of 30 meters.

The Xiaomi Mi WiFi Repeater 2 is useful if you want to significantly increase the flight range and altitude of the Ryze Tello. 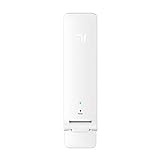 Since it can be operated with a power bank, it is perfect for taking it outside with you. We recommend a power bank with at least 12500 mAh for long-lasting flight fun.